In 2003 Bevan Dewar set 3 South African national records that still stand today. Much like our legendary ‘Sugarman’ Rodriguez, Bevan then disappeared from the competitive freediving scene and left South Africa. When I got into freediving three years later, Bevan’s name would come up in forums and in SA freediving records, but little was known about him by me and by other freedivers he inspired. So just like Segerman  from Mabu Vinyl, I set out to find SA freediving’s ‘Sugarman’… which was much easier than finding Rodriguez thanks to Google. A few emails later and here is my interview with Bevan Dewar:

John: Hi Bevan, it would be great to hear about your most memorable and significant dives – competitive performances as well as recreational freediving.

Bevan: Most memorable dives are probably those involving lying on the bottom half asleep in 5 meters of water – Eel Garden, Dahab and Sharks Cove, Oahu come to mind. Deep dives less memorable, probably due to narcosis, or perhaps because they weren’t quite as enjoyable. I think the moments before deep dives, when I was as relaxed and concentrated as I was ever going to be are some of my more pleasant memories. I don’t feel any of my dives really qualify as significant in the scheme of things.

John: Where did you feel you excelled as a competitive freediver? Were you especially good at equalising, breath hold, finning/swimming technique etc.? Where were your weaknesses and how did you improved them?

Bevan: I was fairly competent in most areas I guess, nothing that I can think of as a particular weakness. Perhaps most credit must go to a fairly methodological approach to technique, training, psychology. I tend to be a bit nerdy with these things, spending too much time on Internet forums. But there felt like quite a bit of figuring things out for myself too, for example getting a feel from recreational diving of what the ideal mental state for diving is, and then ‘reverse engineering’ things so that competitive dives were as close to that as possible. There are so many variables to control in competitive diving, it ideally needs a fairly thoughtful, measured approach I think.

John: Could you give us a brief summary of where and how you learnt to freedive, the training you did and the records you set?

Bevan: I learned to dive when I was a kid, in Bakoven near Oudekraal, with my grandfather. Even my dad and uncle spearfished a bit then. And on family holidays in Plett. Later, after finishing studies, I spent quite a few years in Hawaii surfing, and would dive a lot on the flat days. Then a few courses in the Med with Rudi Castineyra, and the Solomons. And as I say, I learned a lot sitting at my computer. Training wise, a bit of pool stuff when I was in CT, but mostly 6 months living in Dahab and diving every day. I set a CW record there of 85m, must be over 10 years ago now. And I believe a static record at a contest in Cyprus of a bit over 7 minutes.

John: What was the SA freediving scene like when you were competing?

Bevan: SA freediving scene back then? – not much of a scene to speak of, and not sure how it compares now. There were a few JHB guys, I remember Greg Monto Lewis from Cyprus who was trying to get something off the ground in CT, and my training buddies like Roger Horrocks from the Blue Rock dam in Somerset West.

John: Where are you living now and are you still freediving? Any chance you might take up competitive freediving again?

Bevan: Now I live in Melbourne, and sometimes in Copenhagen where my wife is from. I haven’t dived in years, but hopefully might be joining my family end of this year for a holiday in the Surin/Similan islands in Thailand, which is some of the best diving I know of. I do miss it – not so much the deep diving or the competitive aspect, rather just being underwater and relaxed, concentrated, communing with the fish. North Melbourne where I live is a bit far from the coast so these days I try explore similar states of altered consciousness without leaving my living room.

Bevan’s freediving records still stand today and are as follows:

Thank you to Paul Winter and Ant Latimer who put forward some of these questions for Bevan. 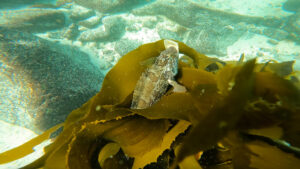 Cape Town Freediving Clip Of The Week 8: It wasn’t too long ago that freediving with 7-gill cow sharks in Cape Town Swimming with Dolphins in Cape Town

Cape Town Freediving Clip Of The Week 7:​ There aren’t many people who would turn down the opportunity to swim with dolphins,